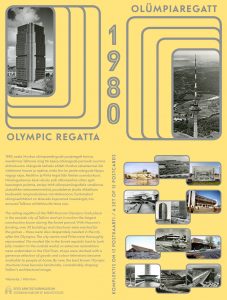 The Estonian Museum of Architecture celebrates 40 years from the Tallinn Olympic sailing regatta with a set of postcards of the Olympic buildings.

Not many Olympic cities have had the chance to use the Olympic structures after the games. By now, the best known of them are considerably shaping Tallinn’s architectural image.

The sailing regatta of the 1980 Moscow Olympics took place in the seaside city of Tallinn and set in motion the largest construction boom during the Soviet period. With Moscow’s funding, over 50 buildings and structures were erected for the games – these were also desperately needed in the city after the Olympics. The city centre and Pirita were thoroughly rejuvenated. The modest life in the Soviet republic had to look fully modern to the outside world, so extensive restorations were undertaken in the Old Town, shops were stocked with a generous selection of goods and colour televisions became available to people at home.

Baby seal Vigri was the mascot of the sailing regatta at the 1980 Summer Olympics, Vigri was created by ceramicist Saima Sõmer; the image is by artist Heinz Valk.