“From the Upper Class to Classrooms. Estonian manor schools ” is open in Heimtali 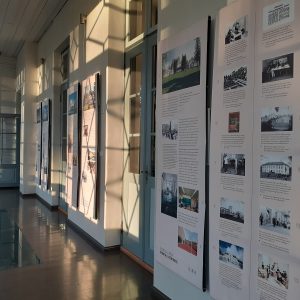 The exhibition “From the Upper Class to Classrooms. Estonian manor schools ” is open in Heimtali School in Viljandi County – on the veranda of the Heimtali manor house and on the corridor walls of the sports building built in the middle of the old ring-stables.

„From the Upper Class to Classrooms. Estonian Manor Schools“ tells the story of the reuse of mansions as schools in new political circumstances. In the last 100 years, since the beginning of the Republic of Estonia, there has been a school in 300 manors, which is nearly every fourth historic manor complex. Today, there are 65 manor schools left. Since the beginning of 2000, the restoration and construction works and development activities of dozens of manor schools have been supported with the help of the Estonian state, the Norwegian Financial Mechanism and the European Economic Area Financial Mechanism program with over 18 million euros

Heimtali School is 199 years old, the school has been operating in the manor since 1932, thus for 88 years, said Urve Mukk, the head of studies of the Heimtali school.

Heimtali School is an excellent symbiosis of historical and modern architectural environment. In addition to well-arranged historical buildings there are unique learning spaces in the manor’s winter garden and architect Peep Jänes’s modern gymnasium skillfully housed in the ruins of the ring stable. Heimtali Manor School, its students and teachers are active participants in the joint activities of the manor schools.

The establishment of manor schools is the result of the land reform of 1919 – manor buildings were turned into to schools, kindergartens, orphanages etc – and schools with teachers-students got the possibility to gain a good education in a bright environment. Manor schools are very special learning environments also today and support value-based education. With the support of the manor school program, other cultural, educational, regional and social life is being improved by organizing the cultural heritage. Manor schools value the Estonian school, strengthen the identity of their region, support life in the countryside and create new jobs.

In Estonia, almost 500 manor main buildings have survived, the school has operated in 300 manors and now there are 68 manor schools..

The exhibition initially opened at the Estonian Museum of Architecture by the end of the European Economic Area Manor School Program (2011-2014) implemented under the auspices of the Ministry of Culture has so far been circulated in Estonian schools, the Estonian School in Brussels, Oslo City Hall and almost twenty Latvian manors. This is one of the most successful traveling exhibitions of the Museum of Architecture.