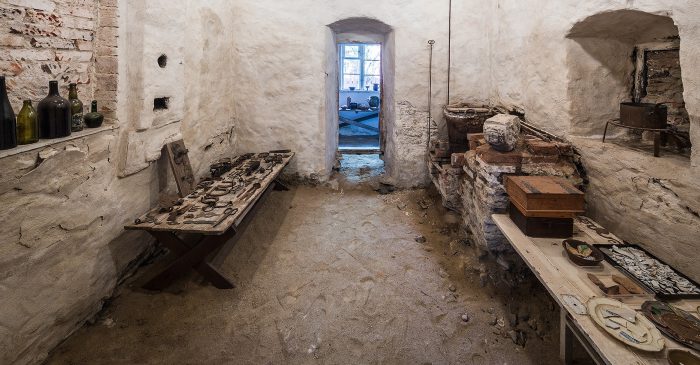 This exhibition is dedicated to the history of a long-established residential property, encompassing both the architecture and way of life, which is deeply ingrained in the household items and furnishings in the house and extends below ground level. Heritage experts say this is the oldest timber house in Haapsalu – it was built in 1782 with details dating from the Rococo era. Archaeological investigations have found that people have been living on this property for four centuries.

In the old days, there was no public waste service, so broken and out-of-use items – bones from meals, shards of dishes, empty ink pots and perfume bottles – were buried on site. Over time, sundry items also happened to be dropped or fall out of pockets and garments – coins, buttons, beads, thimbles and smaller toys. Quite a number of venerable and newer items are discovered during restoration of the house. The origins of the materials scavenged from household rubbish range from Britain to the Netherlands, Germany, Austria, Latvia and Russia all the way to China, which is quite surprising for a small provincial town such as Haapsalu. A number of wealthy individuals have been owners of the property such as a nobleman named Titfer and Count de la Gardie’s manor overseer. Thus a few luxury items from back in the day also made it into the house, among them delftware, blue and coloured Chinese porcelain, porcelain from Meissen and Põltsamaa, a perfume vial from Vienna and table silver.

Starting in 1916, two actors from the Estonia Theatre, August and Betty Kuuskemaa, spent summers in Haapsalu – mainly in this very house. In 1997, historian Jüri Kuuskemaa purchased his grandparents’ summer home, planning to restore it in a stylish manner. In the process, the experience he acquired from past archaeological digs in Põltsamaa proved valuable.