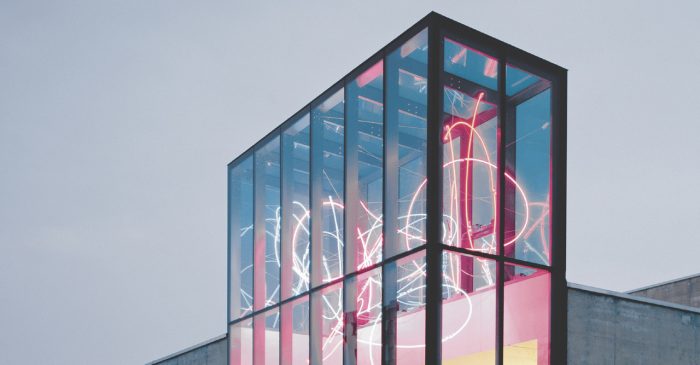 SPIRITUALITY AND SENSITIVITY. Churches and Chapels in Bavaria and Austria since 2000

The exhibition “Spirituality and Sensitivity. Churches and Chapels in Bavaria and Austria since 2000” offers an overview of recent church architecture in the German federal state Bavaria and Austria. Two different countries, but shared language and cultural space have created a fertile ground for the development of contemporary sacral architecture with similar traits. That the main confession of faith in Southern Germany and Austria is Roman Catholic, is also evident in the exhibition – most of the presented churches adhere to this faith, but there are also some Protestant church buildings.

The construction of sacral buildings continues in Europe, although the opposite is often assumed. At the same time, compared to the last church construction boom after the last war, the functions of buildings have changed. Instead of mighty parish churches, smaller buildings like chapels and ‘spaces of silence’ have been erected. In addition, historical churches have been rebuilt or extended in modern form. Current exhibition presents 14 projects, most of which represent a popular church type since the second half of the 20th century, whereby the church hall and parish rooms are joined together in one complex. Besides churches, there are also two private chapels and a small monastery building presented in the exhibition.

The curator of the exhibition is German architectural critic Wolfgang Jean Stock. For the first time the exhibition was shown in the gallery of DG Deutsche Gesellschaft für christliche Kunst (German Society for Christian Art), Munich in 2013.

NB! The exhibition is in German and Estonian.

The exhibition is opened until 7th May 2017.