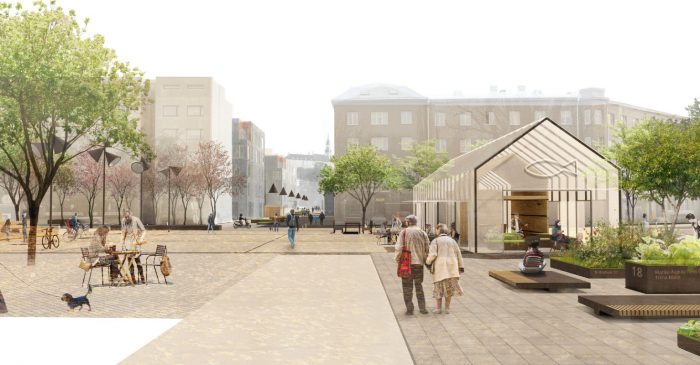 The aim of reconstructing Vana-Kalamaja Street is to shape the most important street of Kalamaja into an urban space that favours pedestrians and cyclists and unites the district. The architectural competition was organised by the Tallinn Urban Planning Department in cooperation with the Estonian Association of Architects, the area of the project includes Vana-Kalamaja Street and the area in front of Balti Jaam railway station. The total length of the street space to be reconstructed is 1.1 km. The current distribution of the territory is vehicle-oriented, pavements are narrow and the traffic management is in favour of automobiles. Since it also lacks proper design and landscaping, it is necessary to create a space that takes into account various forms of mobility and to design an environment that promotes non-motorised transport modes. The wider goal of the project is to design and reconstruct the street as an open and inclusive process, resulting in a modern and human-friendly street space.

Eight design proposals were submitted to the competition that ended on 21 September 2017. The winner of the competition was the Kavakava architecture bureau and their design under the pseudonym Kasvulava (authors Siiri Vallner, Indrek Peil, Kristel Niisuke). The committee highlighted the design’s consistent human scale and milieu-sensitive approach. An interesting solution is presented for Kotzebue Square, giving it a more defined shape and offering a variety of opportunities to the community and the members of the school by planting trees and including a community house and street furniture. The winning design also proposes creating a square in place of the kiosks in front of the passenger pavilion at Balti Jaam. This would highlight both the historic station building and the panoramic view of Toompea. When the project is realized, Toompuiestee can be crossed directly from the square at ground level.