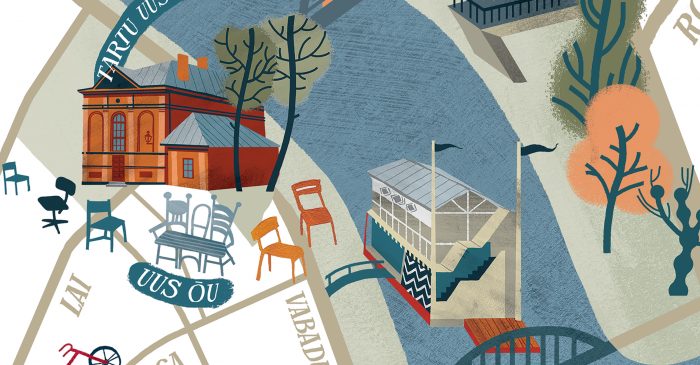 Who Creates the City?

The exhibition “Who Creates the City?” was presented for the first time in Tartu Art Museum Tartmus last autumn. It asks who has shaped the urban environment of Tartu, for what reasons and with what resources and results. The activities and spatial outcomes of the city government, the developers and the citizen activists are presented as wella the contemporary visual and textual works representing the notable locations of Tartu and shaping the face of the town. The aim of the exhibition is to look at the town from the viewpoint of different participating groups. The intelligent development of urban environment is determined by the visions of various participants, their ability to carry out dialogues and to achieve co-operation. We can create a better city together by understanding what possibilities and means for developing the urban space are held by the city government, the real estate developers and the citizens themselves.

The exhibition offers a map for an active citizen, an overview of designs for public spaces and shows architectural objects that understand their context. Glimpses of the mysterious edges of Tartu that shape the atmosphere in the town in their own hidden ways can also be found. In addition, 15 interviews representing various relevant groups are displayed, including architects and officials who plan the town, real estate developers and citizen activists.

According to the curators Pille Epner and Kaja Pae, the exhibition concentrates on the most important processes and initiatives that shape the urban environment of Tartu. “Over the last years, a heated discussion has been carried out asking critical questions about a high-quality urban environment that would follow the historic traditions of Tartu. On the one hand, it is a sign that a more thorough approach to urban planning is needed, on the other it also suggests that the different parties are prepared to hold dialogues.” The exhibition is accompanied by a map for an urban connoisseur that introduces the contemporary architecture of Tartu and shows the ways off the beaten path.