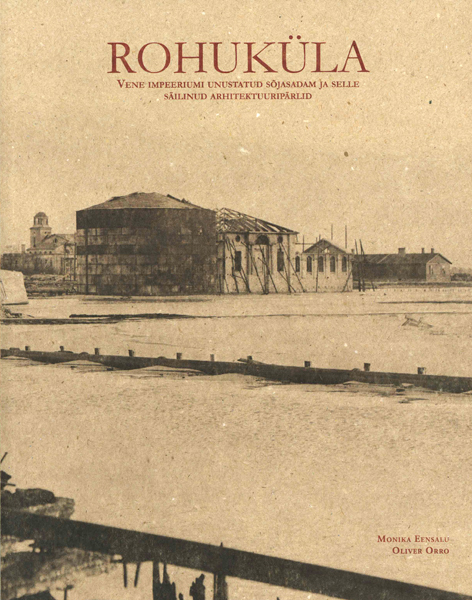 The military structures located in Rohuküla, near Haapsalu, stood out as being the most intriguing among sites that were identified and noted as being potentially valuable by a 20th-century Estonian architectural inventory and protection-programme that was carried out by the Heritage Protection Board and the Ministry of Culture. Upon closer inspection, these buildings turned out to be associated with a military harbour erected at the time of World War I. The brochure, which was compiled by architectural historians Monika Eensalu and Oliver Orro, contains many photos and drawings of the military harbour and naval base erected in Rohuküla, of Lääne County at the end of the Imperial era, as well as of outstanding structures there that have been preserved to this day. These illustrations were previously unknown to the greater public, and bring clarity to quite a number of questions that had not been thoroughly researched previously. It becomes clear that these structures, which had so far greatly fallen outside of academic researchers’ radar, were so very outstanding in terms of aesthetics and engineering at the time of their completion, and that they have their own place in the overall architectural picture of Estonia during that age. The authors also acquaint in the book the background of the harbour’s erection: the St. Petersburg naval defence system and the fortified Muhu Strait position. The authors likewise explain the architectural-historical context, in which the imperially-spectacular naval base was situated. A number of questions that arise out of general human curiosity are also answered. For example: the picturesque ruins sticking out of the reeds, which a ferry passenger sees upon exiting a ship and have been the cause of much speculation over the possible initial purpose and age of the structure, are designated as the remains of the naval base’s power plant, which indeed was never completed. The authors additionally raise the question of the fate of the structures, which are presently standing functionless, for the most part; also addressed is the issue of the future of Estonia’s military legacy more broadly. The book served as a catalogue for the part of the Museum of Estonian Architecture exhibition “Two Times. Two Borders”, which dealt with the Rohuküla naval base. At the same time, the publication – which includes an abundance of source citations – can also be observed as an independent study, which should interest all enthusiasts of military- and architectural-history literature.