The best of Soviet Modernism in Tallinn

The legacy of occupation is contradictory everywhere. In Estonia, the Soviet regime and ideology followed the barbaric air raids that destroyed a significant part of Tallinn. This tour combines a short visit to the UNESCO World Heritage listed Tallinn Old Town and the new structures built during the Soviet period. Several pearls from the 1990s will also be visited.

The tour starts in the Old Town. In addition to historical content we introduce the story of 50 years of the Tallinn Old Town Conservation Area, we see the new buildings from the 1950s that replaced the medieval buildings which were destroyed in WWII. The tour continues in the Museum of Occupations erected in 1998.  Passing the building of the National Library from the early 1990s, we proceed to a cohesive area dating from the 1940s and 1960s. The former “cultural centre” housed the complex of Academy of Sciences including a library, the buildings of various institutes and even the luxurious apartments of the scientists. The quarter includes also former headquarters of the Estonian Communist Party, now the Ministry of Foreign Affairs. 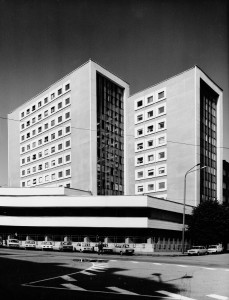