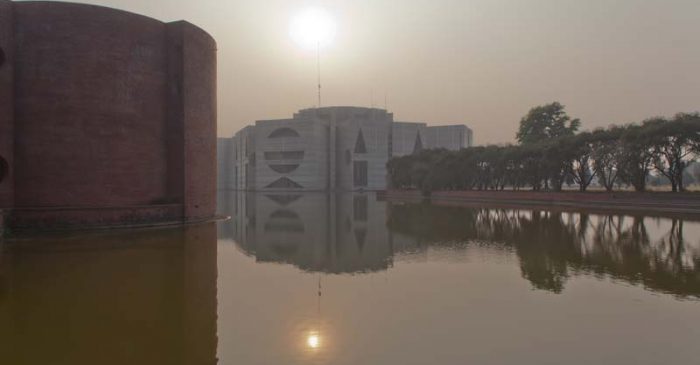 In January of 2017, the artist and architectural photographer Arne Maasik travelled to Bangladesh and India to photograph the architectural projects of Louis Kahn (1901–1974), an American architect born in Estonia.

As an architect Kahn is considered to be a mystic and is held in extremely high esteem in the international architectural world. Interest in his visual thinking has been intensive throughout the early 21st century.

This exhibition is part of a broader research process, in the course of which questions are being posed about the connections between Kahn’s architecture and medieval European fortress architecture, and more specifically, the Kuressaare Castle.

Kahn’s most important work, his Magnum Opus, is located in Dhaka, the capital of Bangladesh. It is a gigantic complex of government buildings, the construction of which was started ten years before Bangladesh became an independent state.

The central structure of the complex is the National Assembly Building. It is assembled around a central axis, but the building itself is comprised of eight different-shaped elements. The symmetry is enriched by the Islamic prayer room, which is directed toward Mecca.

Everything has been built by hand, and therefore, the dimensions of the elements and blocks are based on the relative dimensions of the human body. The recurrent flooding of the area presented a challenge that was resolved by employing the local method. The construction went on for twenty years. The architect did not live to see his momentous commission completed.

The concept of the Indian Institute of Management was based on the Harvard Business School, and it was established to educate the young Indian business elite.

The sponsors of the institute included the Sarabhai family, who had already commissioned three earlier projects from Le Corbusier. When the clients approached the Indian architect B. V. Doshi, who has collaborated with Le Corbusier, he recommended Louis Kahn to be the architect.

As in many of his other projects, Kahn based his design on the idea of a convent. The school’s architecture comprises an autonomous campus, which includes everything required for study. Based on local tradition, brick was used as the construction material.*

*Material from the travelling exhibition Louis Kahn. The Power of Architecture has been used in the preparation of the wall text.

Supported by Cultural Endowment of Estonia