Lecture by Enrique Sobejano on Friday, March 20th in the Museum of Estonian Architecture 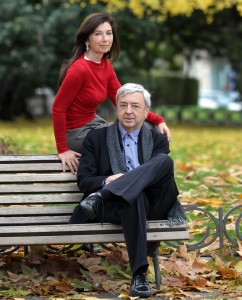 In light of exhibition „The Window and the Mirror“, the founder and partner of Nieto Sobejano Arquitectos, Enrique Sobejano, will hold an open lecture on March 20th at 17.00 in the Museum of Estonian Architecture. The Spanish architecture bureau received the prestigious Alvar Aalto Medal and became an honorary member of the American Institute of Architects this year. The Madinat al-Zahra Museum by Nieto Sobejano Arquitectos in Spain received the European Museum of the Year award in 2012 and the Contemporary Art Centre Córdoba was shortlisted for this year’s Mies van der Rohe Award. In 2014 Nieto Sobejano Arquitectos won the architecture competition of the Arvo Pärt Centre to be built in Estonia by 2018.

The majority of Nieto Sobejano’s work focuses on museums and other cultural venues – in addition to the aforementioned Madinat al-Zahra Museum and the Contemporary Art Centre Córdoba, the Joanneum in Graz, San Telmo Museum, the Sculpture Museum in Valladolid and the History Museum in Lugo can be considered their major works. Nieto Sobejano Arquitectos can be characterised by a subtle sense of material and detail and a skilful use of natural light. Equally important is the context and the experiential quality of each project. In his lecture, Enrique Sobejano will introduce the background of his creative process – the reflections on the internal and the interpretation of the external world, which he compares to the window and the mirror.

Enrique Sobejano (Madrid, Spain, 1957) has graduated from the Universidad Politécnica de Madrid and the Graduate School of Architecture and Planning at Columbia University in New York. He is professor at the Universität der Künste Berlin (UdK) and has been a visiting critic and lecturer at various international universities worldwide. From 1986 to 1991 he was co-director of the architectural journal ARQUITECTURA. He chairs and participates in international conferences and juries and is a founding partner of Nieto Sobejano Arquitectos. The bureau has offices in Madrid and Berlin and currently has projects in Germany, Spain, Austria, Estonia and Morocco.

The lecture is held in English, entry with museum ticket.

Exhibition “The Window and the Mirror: Nieto Sobejano Arquitectos” is open until March 22nd.