An online lecture on „The Obscure Cities: Imaginary Architectures Between Utopia and Dystopia“ 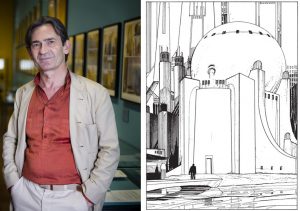 NB! The lecture will be held in English.

The graphic novels titled “Les Cités obscures” (known in English as “The Obscure Cities”) made by the Franco-Belgian comic classics show the elegant mix of architectural graphics and comic art. The action in the series often takes place in a retro-futuristic parallel world akin to ours, revolving around fantastic cities and buildings. These albums play around the patterns of an obsolete modernity – that of Jules Verne, Antonio Sant´Elia, Victor Horta or Le Corbusier. Halfway between utopia and dystopia, The Obscure Cities inspire dreams about the infinite shapes cities could take now and later.

Writer and critic Benoît Peeters was born in 1956 in Paris. He studied philosophy at the Sorbonne University and defended a Master’s degree supervised by Roland Barthes. In 1976, Peeters’ first novel “Omnibus” was published. Today he has 60 published works to his name. As a scholar of Hergé, Peeters has authored several treatises such as Le monde d’Hergé (The World of Hergé) and Hergé, fils de Tintin (Hergé, Son of Tintin). He started the legendary graphic novels „Les Cités obscures“ (known in English as The Obscure Cities) with his childhood friend François Schuiten in the 1980s.  In 2012, Peeters’ biography of philosopher Jacques Derrida was published; it has since been translated into ten languages. Peeters currently serves as a visiting Professor in Graphic Fiction and Comic Art at Lancaster University (UK).

Lecture: October 8 at 6pm via Zoom and at the Rotermann Salt Storage (2 Ahtri St., Tallinn)

Language of the lecture: English

Exhibition “The Obscure World of the Urbatect. Architectural comics by François Schuiten & Benoît Peeters” is open in Tallinn until November 8, 2020.